Sometimes, we enjoy venturing out of our desert landscape in Phoenix and enjoying an entirely different atmosphere. Our country features a variety of different landscapes and climates, and one of the most beautiful little towns we’ve visited is Savannah, Georgia.

This charming Southern town was so beautiful that Sherman decided against burning it down during the Civil War. As one of the city’s most famous tourist attractions, Savannah’s Forsyth Park includes a stunning water fountain. Let’s learn more about this gorgeous little park in the deep South:

Forsyth Park is located nearby the area where the French and American allies set up camp during one of the bloodiest wars of the American Revolution. At the north end of the park, a French commander dug siege trenches in hopes of reaching the British army and ambushing them. Unfortunately, his efforts failed, but the United States won the war anyway.

In the first half of the 19th century, Savannah’s population dramatically increased, and its upper crust citizens resided on Bull Street. Savannah’s nobility enjoyed taking evening promenades, which were basically leisurely strolls in the area. They wanted a designated area for their walks, so the city created a recreational park for this purpose and more.

At the time, Parisian parks and squares were highly admired by the elite, so Savannah modeled its own recreational areas after those of the famous French city. This port city reached extremely high temperatures, and air conditioning had yet to be invented. It only made sense for a fountain to be erected in the center of the park.

The fountain served many purposes. Not only would it cool people off on the hottest summer day, it also beautified the area. The wide sidewalks leading to the fountain are lined on either side with huge, moss-hung oaks. The fountain serves as a centerpiece to the park’s gorgeous landscape.

Forsyth Park’s famous fountain is painted white and constructed out of cast iron. It features four mythical Greek figures that are half-man, half-fish and holding shell horns. The basins feature a relief leaf pattern and include scenery of wading birds that one would find in Savannah’s marshlands.

When the fountain was unveiled in 1860, it’s debut did not go as smoothly as anticipated. The water spouts were way too forceful and projected water onto onlookers. Designers created a larger basin to accommodate such a heavy water flow.

Not Ordered From a Sears Catalog

Legend has it that the famous fountain was actually ordered from a Sears catalog. The fountain was not ordered from this catalog; it was ordered from the James, Beebe & Co Illustrated Catalogue of Ornamental Iron Work. This company was also responsible for providing ironwork for the Library of Congress and the U.S. Capitol Dome.

Who Designed the Fountain?

Nobody knows who exactly designed the Forsyth Park Fountain. People believe that Jean-Pierre-Victor Andre designed the original fountain for London’s 1850 Great Exhibition. This design was said to been based off of the Paris Fontaines de la Concorde, which were designed by Jacques Ignace Hittorff.

Other Cities With the Same Fountain

Poughkeepsie, New York bought the same fountain, which was used for its Soldiers’ and Sailors’ Memorial Fountain. Dedicated to the city’s fallen Civil War soldiers, this park is located on Little Market Street.

Savannah’s Forsyth Park fountain has an interesting history and adds to the city’s beauty. If you would like to add to the beauty of your own Phoenix landscape, consider purchasing an outdoor water feature from Elemental Fountains. With Years of experience behind us, we can create the garden fountain of your dreams. Contact us today to get started. 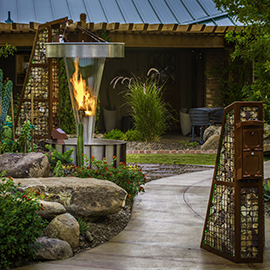 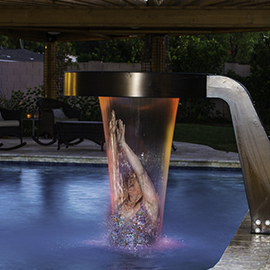 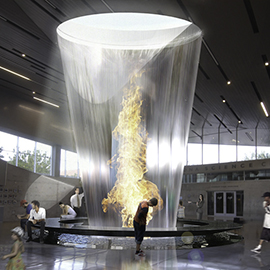